Us having just turned into a ten-year old company, it's a great time to move into the next chapter. Hence now, we are launching a new brand, a new platform and a new narrative under the name Falcony.

This blog post will take you to the very beginning and all the way back to the present. So grab a comfortable position and enjoy the ride, like we sure have done.

For those of you who have questions regarding the launch as a customer, head over to our FAQ document to find out more.

In order to see the whole picture, let’s go back to the year 2012. Like for many Finnish startups, it was in a sauna where the foundation of a new venture was laid out. While enjoying the steam, the original Plan Brothers, Okko Kouvalainen and Eetu Kirsi realised that the upcoming revision of the Finnish emergency planning regulation meant a clear market change that would spur a need for a product to help organisations manage the rescue plans of their properties.

A market with a need for a great product meant sleepless nights of execution leading to the launch of Pelsu Pelastussuunnitelma, which in seven years grew from zero to 40 000 buildings using the platform. This first chapter ended successfully in 2019 when Caverion Suomi Oy acquired the Pelsu product, including Eetu and his team, to continue the story of Pelsu.

And then there was only one brother left. The end? Not so soon.

Towards a single platform

During the Pelsu journey, we had already realised that we had this huge yearning of doing something more than purely a product for compliance-driven documents. We were young and tech-oriented citizens of the world, who had not previously worked in the fields of Security, Safety, Risk, Quality or Property Management. That is why we took many of the "known truths" in the industries as theories to be tested. And to test these theories we had endless talks with thousands of customers, users and prospects.

From all those conversations we learned about the problems of the underreporting of incidents, under-completion of tasks and inspections, and the under-communication within and between departments and organisations. And all this leading to disengaged employees and managers making decisions with distorted information. It's this problem of under-involvement that we really set out to fix, leading to the development of audits.io and incy.io. Both developed with the mobile first ideology, they simply looked at the problem from different angles: incy.io multiplying the amount of reactive observations from the field, and audits.io enabling all employees to carry out their audits and inspections like they would use an app they were born with.

We started with two separate solutions in case we needed to kill either of them without impacting the other. At first this seemed logical as the core use cases were different. Later on as we started to develop the same user invitation workflow, place management and other features to both products, we understood that they were destined to be together. Not only were the products competing from the same development resources, the reason for the merge gets us back to the problem we wanted to solve. In the end, what we do is involve people, and having just one tool for the end-users is an order-of-magnitude more involving than two. 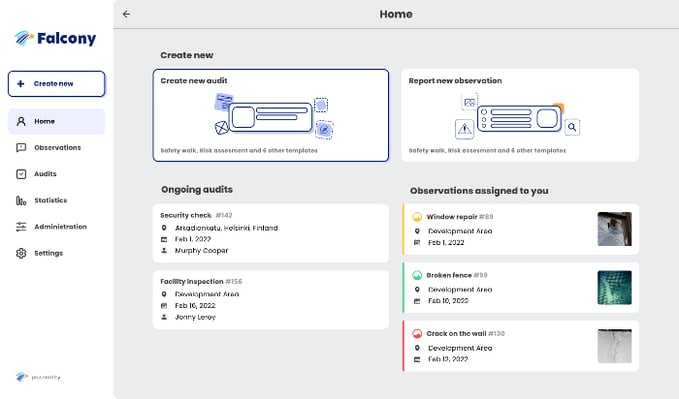 With the Pelsu exit, the foundation of the Plan Brothers brand had changed and we felt the need to create room for something new and more resembling to the mega-problem of involvement we are set to solve. Not only that, the world had changed.

Ten years ago, when we started, the world looked very different. Smartphones had just started to take hold in consumer life but there were far fewer apps than there are today. All areas from safety, risk, quality and facilities management, and of course even emergency planning, were managed with desktop software, Word-documents, Excel-spreadsheets, email or with pen and paper. They all seemed to work just fine, but then consumers and their expectations changed. With WhatsApp, Slack, Teams, Uber, Spotify and Netflix, all of us started to look for similar experiences in our work-related tools.

For the digitally native younger generations, this wasn't a wish but an expectation. In the absence of involving and easy-to-use tools, they prefer not to use any alternatives. This creates huge stakes for anyone whose work is dependent on people sharing what’s going on and reporting that information forward. But it’s not just the young people who want this. Even my 85-year old grandmother now uses WhatsApp daily.

Still, too often when we go to work, we are greeted by these soul-sucking management systems that feel like filling a tax-form. With multiple "tax-forms" competing for the attention of the employees, they simply stop using all of them. And when just a few people use a management system, can we really say we know what's going on? Can we really report to our bosses and customers the truth of what's happening? This problem is so common that most have almost learnt to un-see it. We've even coined a term for this blindness: Management System Mindset. It's about serving the management system more than the actual purpose it was bought for.

Trust me, we are getting there. Let's first remind ourselves about the goal of setting up a process for let's say auditing, incident reporting, whistleblowing or tenant portals. A lot of the time we are looking for early warning signals to avoid something worse from happening and to improve what's already working. And the fact that we, almost daily, read about serious safety issues, wrongdoings, and new risks, should tell us that there has to be a better way. But even if we never experience a disaster or a crisis as severe as these, there's still the deep frustration of having to firefight the same problems over and over again.

The question we've really been asking ourselves the past two to three years is what would it take to involve EVERYONE in today's world? Our first aha moment was to understand that it’s never the management teams, boardrooms or the middle managers who have the best knowledge of potential issues, problems and early warning signals. It's the employees and all those eyes in the field that collect and process this information on a daily basis by observing their surroundings. But an even bigger aha moment was that those people usually have a hard time reporting their findings forward. We are all human beings with an intrinsic need to have a voice, to be involved, to do something meaningful.

And that's what the Falcony brand is about. Involvement designed for enterprises. It’s about valuing involvement over documentation, and collaboration over departments or functions. It’s about showing that we listen to everyone and never blame anyone for using the wrong tool. And last but not least, it’s about solving the problem of under-reporting, under-communication and under-involvement. 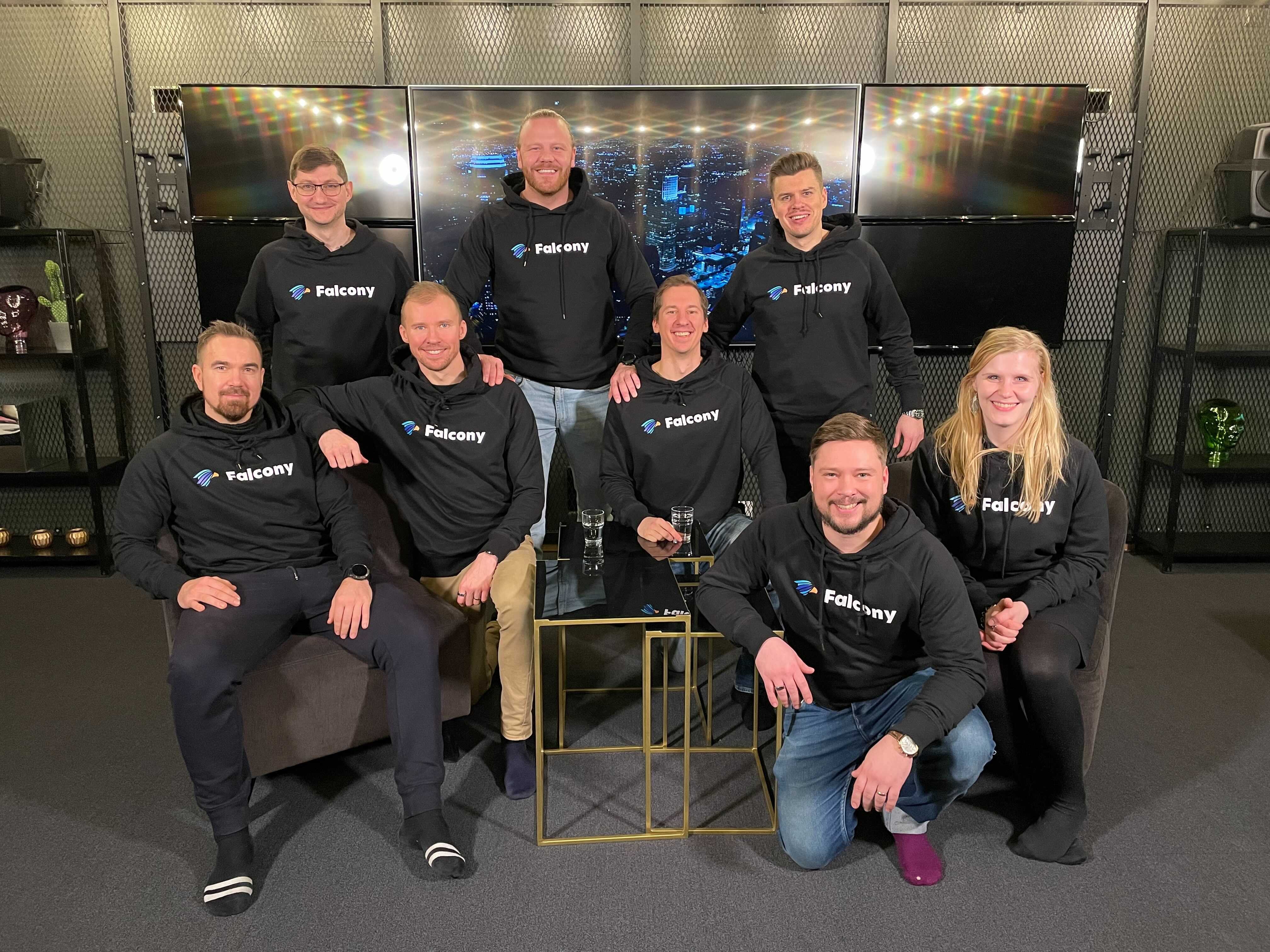 When involvement is broken into its building blocks, it turns into awareness, alertness and action. What's more alert, more aware and more prone to action than a Falcon(y), the animal that is both the fastest and has the best eyesight on the planet. Besides that, our name also includes a twist from the word balcony, which as a business term is often linked to getting a wider view of what's really happening. Simply put: Falcony involves the eyes in your workplace to enable you to know what’s really happening in your business environment.

And what does the new platform and brand mean to our customers and community?

To sum it up, we can definitely call ourselves lucky. Not all companies are able to get to their second decade of age, especially by keeping such a tight core of employees and amazing customers aboard. So more than ever, we want to thank all of you: the customers, the employees, the partners and everyone who's been part of this journey!

Employee involvement is a key factor in workplace quality and risk management.

Customer Experience Is Not Just One Department

Customers are the centre of any business. If your business is going to thrive, then it needs to...

Defensive Decision-Making: Why It Happens

Defensive decision-making or decision holding is when a manager (or any decision-maker) ranks one...