“Information flow is what the Internet is about. Information sharing is power. If you don’t share your ideas, smart people can’t do anything about them, and you’ll remain anonymous and powerless.”

The industrial revolution gave birth to the management style that is today known as the “top down management”. In it, it is the top management or senior leaders who make most if not all decisions. The bigger the organisation and the more levels there are in the hierarchy, the longer it takes for the decisions to get passed down to the front line. Besides this problem, there are the side effects that some employees don’t accept the decisions because they haven’t had the opportunity to give input on them. From a management point of view, the problem often seems like employees are not giving their full effort. On the other hand, from front line point of view, it feels like management never listens to them. Sometimes this is called a pyramid of shit (see image below). 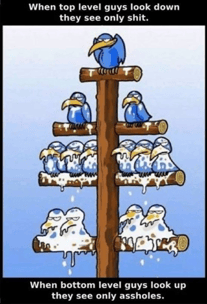 What matrix organisations enhance is reporting in (at least) two directions: reporting to vertical managers and horizontal managers. What they too often miss, is two-way communication where employees are truly heard and new practices or processes are effortlessly implemented. One of the reasons for this is that, even though matrix organisation opens up more channels for reporting, it also creates complexity, competition of resources and often conflicting requests and decisions. On the other hand, in team-based organisations, the problem often grows from information being siloed within the teams and not being shared across them. We’ll get into this later.

Where top-down management style has worked well is in setting clear focus what everyone in the organisation must do even if it comes through as command and order. Knowing the problems of different organisational forms, what can we do then? Should we just choose one and accept the natural systemic problem within that? It’s time to reframe the problem in another way.

There’s a great metaphor in Ben Horowitz’s book The Hard Thing About Hard Things about two types of CEO’s: peacetime and wartime. In peacetime, the organisation is free to improve on multiple fronts at the same time, adding more projects than closing existing ones and all in all do more. In comparison, during the time of war, the organisation is facing a threat or a crisis that forces it focus and move faster. As we have discussed earlier, there are multiple fronts where such threats are stacking up and eventually driving all organisations to see their environment as more of a war than peace.

Getting back to reframing the problem: instead of seeing organisational forms and people as the source of the problem, let’s start looking more at information flow and especially how it is put into action more efficiently. One big trend today is to empower organisations with more effective communication tools such as Slack, Flowdock (our favourite) or Microsoft Teams. These often help a lot to reduce email burden and enhance in-team communications but what is also needed is open channel to report issues and incidents more openly and better management systems to diffuse best practices and new processes. Aviation has learned this the hard way but today, as we know, its record is amazing. Just look at the image below. 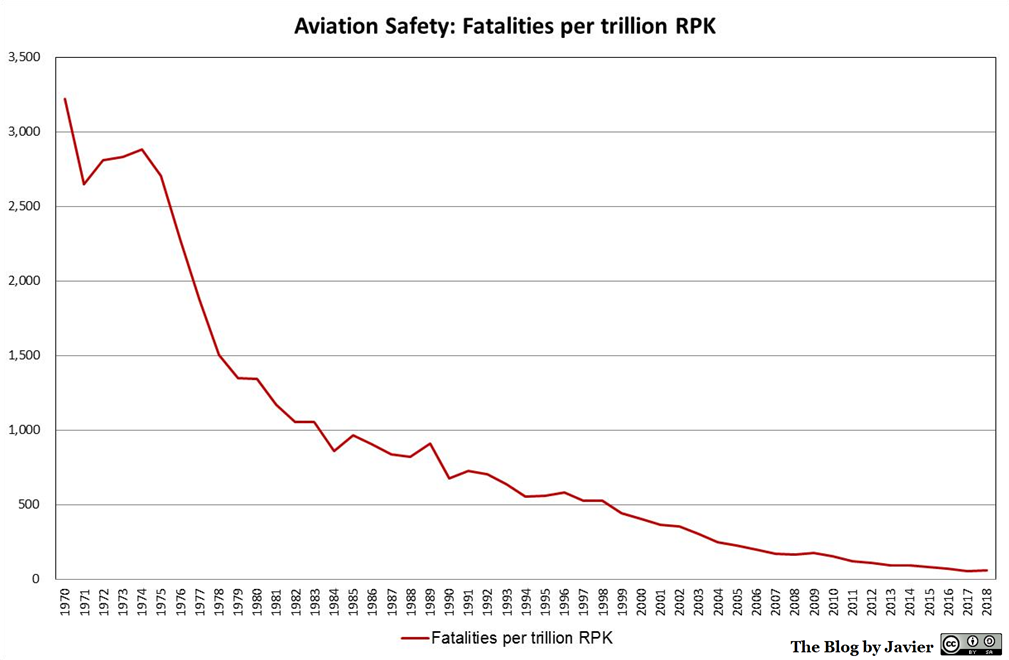 It’s not only because low threshold observations are reported openly, but also because the lessons learned are being rigorously implemented around the world. Whenever you notice a pilot or ground handler filling a checklist, that is the diffusion in action.

Our final point considers information silos, which is the curse of team-based organisations. Information silos are being created when teams or departments choose either wittingly or unintentionally not to share information with other teams or departments. At first, it might not seem a problem, but the bigger the organisation the farther away there are teams and people who have no idea what’s happening in other departments and the less they can then contribute. This is sad, because the best ideas and solutions are often a mixture of multiple opinions, dozens of viewpoints, requiring hundreds of iterations and clashing arguments what should be included and what should be left out.

The problem grows even worse when different teams start to see themselves as competing against teams killing all fruitful communication and collaboration. Obviously this stall information flow, but it may create what IT professionals call multiple sources of truth as opposed to single source of truth. When people fight whose data is the true data, you know you have information silos.

We are not saying that organisations should choose some mega-ERP system that covers everything. That is the top-down approach remember. Instead, give enough freedom for teams to choose their own tools and systems but make sure they are integrable with the core systems of your organisation. Integrations are the future whether you like them or not. Our recommendation is to not even consider those service providers who don’t show integrations on their website.

Another way to avoid information silos to make as much data open, accessible and transparent as possible for all employees across departments and teams. Having global tools and systems may help but too often they do not consider user experience and thus stay unused. Instead, start by sharing analytics and KPIs in internal newsletters and on the intranet. In our office at Plan Brothers, we have drilled a dozen TV screens that showcase some of our important metrics in real time.

People need information to do their best work and information wants to be free, to a degree of course. As a manager seek for ways to enhance horizontal cross-team collaboration, two-way communication for everyone to feel heard and more effective ways to implement and diffuse lessons learned.

Continue to the blog posts of the series here:

Friction: the number one killer of organisational habits

The resistance that one surface or object encounters when moving over another.

Psyche: the cognitive barriers that inhibit us admitting mistakes

“When we all think alike, no one thinks very much.”