Friction: the number one killer of organisational habits

The resistance that one surface or object encounters when moving over another.

First a little theory about friction as we like to define it. There's a great theoretical model created by behavioural scientist B.J.Fogg that shows why certain actions happen or don't. Let's take an example of incident reporting, one of the most typical tools for safety, quality and security managers to engage their organisations. For any individual to actually internalise a habit of reporting incidents, three things must be in place: a trigger, a motivation and an ability. Trigger is typically the actual event of the incident (e.g. near miss, injury, defect, failure or hazard). Motivation is oftentimes created by the organisation by making it compulsory (we'll come to this later) or by encouraging with rewards. But ability, the most disregarded of the three, is the area associated with friction and where ease-of-use comes into play. 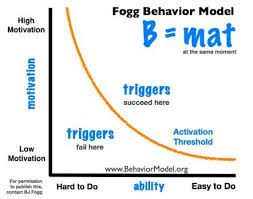 Friction is the factor that makes it harder for individuals or organisations to adopt new abilities, implement new processes or embrace new habits. Friction is high when old legacy ERP system gets pushed by force to the front line use. It's high when incident reporting is available only on laptops and not on mobile. Whatever creates physical or mental barriers between the trigger and the action, is what we call friction. Next we'll cover four different types of friction.

Friction of frontline use

Admitting mistakes and failures must happen where they are made in the first place and most mistakes happen there were employees meet the real word: in the front line. That's why incident reporting is so valuable tool regardless of industry, function or use case.

Everybody knows how frustrating it is to do anything nowadays with tools that are not easy-to-use or software that is really slow. It's like we found a new need the day when Apple revealed its iPhone. Nowhere near is this worse than in Business Applications as companies take years or decades to replace old systems what consumers can and will do in hours or days.

It's good to understand how this friction creates the barrier to learn and it is by first making the learning curve steeper and thus mitigating the first-time usage. Second, even when someone may have learned to use the tools once, it doesn't mean they remember to do that correctly next time, thus discouraging any future use. → This is especially a problem when a large organisation implements a system designed for system-of-records to be used globally in the front line with no regard to ease-of-use but decides that “mobile application as a requirement” equals ease-of-use.

Considering that we shouldn't tailor our non intuitive legacy ERP system for front line use, should we instead implement one tool for each country, function and use case? Not necessarily. By implementing multiple tools for similar looking use cases, this will also create friction by making it impossible to remember which tool is which type of use. Remember: your front line are not experts at defining is that specific incident security, safety, environment or quality related. It might actually be all of them!

We so often see that companies with just hundreds of employees have 7 to 10 distinct tools for different types of field reports, inspections, audits and incidents, just consider what happens to the number of reports when this is real. This is friction of choice in action.

If you ever hear complaints of too difficult to use tools or too many tools, that's a sign that there's friction of choice. Your job as a manager of a certain process or function is to make sure the process is as easy as possible to execute. That's why we always recommend adding a line in RFP's about the number of users of each module. The more users and the closer to the front line, the fewer tools they tolerate. Their way of saying no more is to just stop using them.

The average worker spends 28 percent of their work week on email, more than 11 hours a week. That's like spending from Monday to Tuesday afternoon in email and only then start to work on something productive. Email was never intended for conversational communication and this has created a huge friction to learn from mistakes and failures.

All observations, whether they are admitted mistakes, machine failures, incident reports or quality defects, are just that, observations. It's the honest communication, objective investigation, open discussion and thorough analysis that transforms those observations into ideas, tasks, actions, lessons and finally new practices that prevent those costly mistakes from happening again.

When we try to do the necessary communication with back and forth emails, the valuable knowledge get lost in the noise, and we miss the opportunity to actually learn from them. What we need are not more tools but better ones. A great example in this arena is how conversational technologies such as WhatsApp and slack have taken the markets by storm. For marketing folks there’s even a new buzzword: conversational marketing. We bet that it’s not going to be long until you’ll notice conversational [fill in your own word] to pop up in every other function as well.

One of the most discouraging feelings after reporting and sharing an incident or a mistake is to never hear from it again. Bottomless pit sucks not just the mistake or the incident but work life passion from the reporter. A good feedback is always timely when the case is still fresh in the mind of the observer. That's when more information can still be scooped out. Needless to say, it's not helping if the feedback comes a month or two later or as we once heard in one Healthcare organisation: two years after the original report.

For supporting functions such as HSEQ and facility management, there’s a lot to learn from more data-mature departments such as Sales, Marketing and Finance. Just as incident reports are feedback waiting to be answered, so is a lead that has just filled out a website form. A striking truth from sales is that the odds of the lead replying to phone calls just five minutes after filling the form drop almost 900%!

The more conversational and real-time you can make your feedback on incident reporting, nonconformance recording or service request processes, the better the end-user experience.

All learning requires feedback, either from someone else, from the environment itself or from the inside when new information gets internalised and mixed with old information.

All of this is above-all about making it easier for employees and other stakeholders to record and share their honest mistakes, incidents and other observations. Get rid of different types of friction, and see how the organisational habit of incident reporting strengthens and starts to spread and impact other organisational habits as well.

Continue to the blog posts of the series here:

If executed properly, a functionless organisation can improve the efficiency and agility of your...